In keeping perspective on what the SCW LGBT club means to our community, we honor our history.

Suzanne Arnopolin, one of the founders and the first President of the SCW LGBT Club recalls the beginnings of the club:

On November 25, 2016 nineteen people crowded into the small living room of Suzanne Arnopolin and Ronnie Williams to discuss the concept of starting a club dedicated to LGBT concerns in the community.

We reached these folks by word of mouth and networking, as well as help from Sandy and Ann who had recently organized a small LGBT group in Sun City Grand, Surprise AZ.

Suzanne approached the administration of Sun City West Recreation Centers, and after a few meetings, they agreed to allow us to pursue becoming an Unchartered Club. To this end, the Administration provided a one- time notice in the Rec Center News, and a one- time only free meeting room to allow us to reach more members of the community, and gauge the level of interest in an LGBT Club.

On February 10, 2017, after a notice in the Rec Center News, and the Independent newspaper, 66 people showed up at the Acacia Room in Palm Ridge Rec Center. It was an incredible meeting, and far exceeded our expectations for attendance. We heard many stories of residents feeling isolated, unsure there were other LGBT folks in the community, and concerned about the safety of being “OUT” in Sun City West Arizona.

Based on the level of the LGBT community response, we decided to pursue becoming an Unchartered Club, and accomplished this with strong support from the Rec Center Administration.

We did not have any of the privileges afforded to Chartered Clubs, which meant we had to find and pay for our own meeting space. Also, we did not have an SCW sanctioned publication in which to advertise our club events and gatherings, however we were placed on the official SCW Rec Center Website under the heading of Unchartered Clubs, with our contact information.

We continued to meet and pay our own way @ Unity Church, and in the Sun City West Foundation meeting rooms. Folks from Sun City West, as well as surrounding communities of Sun City, Corta Bela, Surprise, Ventana Lakes, Buckeye, and even Phoenix began to fill our rooms on a regular basis.

The idea to become a fully Chartered Club began to percolate. Not only would we receive free meeting space and monthly notices for our club events, but the legitimacy and permanence that comes with Charter status. We organized ourselves into a Board, with officers and a few committees. This was where the Good Times Committee was born, to help plan our social calendar. Over the summer of 2017, many of us worked very hard at crafting our bylaws, and adhering to the Rec Center guidelines. We opened a bank account, and obtained an IRS Tax ID. We also began to gather signatures of 100 SCW residents who supported our club.

Becoming Chartered was not without some controversy, as folks from the surrounding communities wanted to stay with our group, but now would only be able to attend three times a year as guests.

On Thanksgiving 2017 we had a wonderful catered dinner at the SCW Foundation, providing a welcoming and safe place to gather together with our friends and Allies.

November 2017 also brought news that we had been approved as an official Chartered Club, and on December 11, 2017 we had our first official General Meeting as a officially Chartered Club.

It takes a Village to raise a Club, and we would not be where we are today without the help of: Bob, Leo, and Gus who planned many of our social events, Sheila who guided us through the
Bylaw creation process, Judy who organized and maintained our member roster and data, Maria who created many of our fiscal policies and the spreadsheet required by the Rec Ctr., Janet who created our first generation of websites, and conducted club business in my absence over the summer, Gerry for his calm, analytical approach to any issue the board struggled with, and Ronnie, my wife, who was encouraging and patient during tough times, and jumped in as a volunteer whenever the need arose.

There was also a core group of people consisting of Cindy, Cora, Alan, Dwayne, Roger and Leo who always rose to the occasion, and stepped up when we needed volunteers.

Now in 2019, we have a new Executive board, full of energy, new ideas, and ready to take us to the next level. But part of the reason for presenting this history is to remind people how unique our Club is, and that we should not take the Club for granted. Ours is the only Sun City West Chartered Club dedicated solely to preserving a safe and welcoming space for the LGBT community and our Allies, a place to connect, network, and end isolation. We all know what it feels like to be left out, or alone, or invisible. None of us want to go back to that place again. There are many other clubs that can satisfy our need to play pickle ball, dance, hike, shoot pool, play cards or enjoy food and drink. But there is only one Club that honors, protects and holds a small space for us, where we feel safe in our own skins as well as in this community.

Don’t forget your LGBT history. It has taken many years to reach the level of freedom and acceptance that many of us enjoy. For that reason alone, it is imperative to continue the growth and health of our Club, so that it continues to be here for everyone now, and in the future. 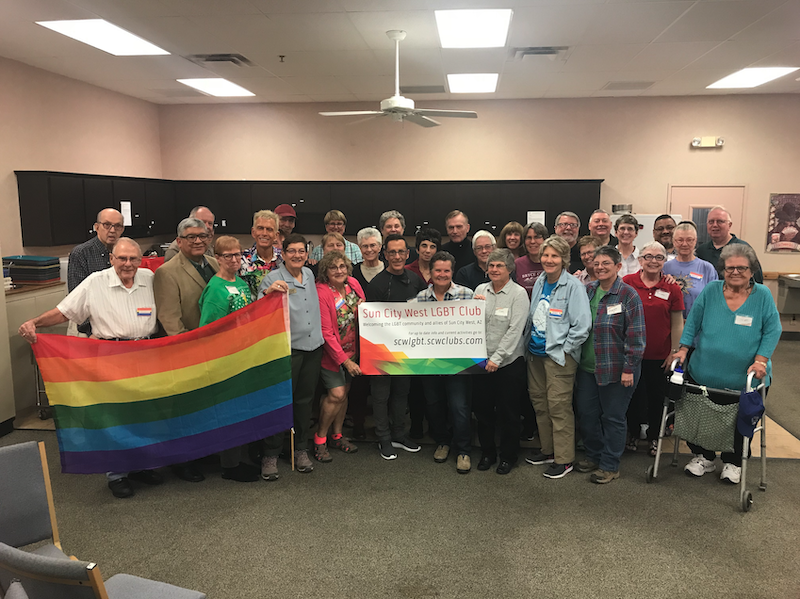